Keeley Jade Flanders, aka Shabby Eliot-Katchadourian, is a housemate from Big Brother 11.

Former child actor turned rebel girl Shabby (real name Keeley) describes herself as 'a walking contradiction with a love of poetry and giant boobs'. A squatter, Shabby lives in a squat in a Victorian house in south London.

Keen to transform people's opinions of squatters, Shabby believes she is a citizen of the world. She can not spend more than six months in one place so has to move on. Despite wanting to portray squatters in a new light (she has a shoot planned with Italian Vogue) she admits she eats food discarded by supermarkets.

Her film career as a child star saw her appear in Black Beauty and lose out to Lindsay Lohan for the lead role in The Parent Trap. She's now returned to filmmaking from the other side of the camera and thinks 'films shouldn't be escapist; they should hold a mirror up to the world and show it what it's really like'.

A country girl in her childhood, she moved to London aged 17. She always knew she was gay and at school all the girls who wanted to experiment with their sexuality used to kiss her to test the waters. Her mum found out she was a lesbian when she was caught Shabby with her first girlfriend.

She dislikes public transport, authority figures and strawberries - her fear of mould means she refuses to eat fruit at all. She hates being told no and has an inner spoilt brat waiting to get out. Oppression and Keira Knightley make her angry and she was once regressed and learnt she was an elf in a former life.

After Big Brother, Shabby appeared as one of the leads in the Channel 5 series Candy Bar Girls which launched in July 2011.

Shabby was the lead singer of band Voodoo Hussy who released their debut single 'Say You Love Me' in November 2010. Voodoo Hussy broke up in early 2012, with Shabby and other members founding rock band Legend in Japan.

Shabby and Caoimhe in the Big Brother 11 Diary Room 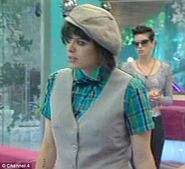 Shabby on the day she leaves the Big Brother 11 House

Shabby and Caoimhe on the Big Brother 11 Final