Nichola Holt is a housemate from Big Brother 1.

Nichola was a 29-year-old art teacher from Bolton, Lancashire who lived with her parents. She achieved further education and gained a BA in Textile Design. Her Mother, Joyce, is a member of a religious sect and a worrier. Her father is a hermit who loves routine and is a private person. She has one sister. Nichola left home at the age of 17 and is into both Buddhism and Spiritualism.

Nichola has a shaven head is a slim 5'5" and has several tattoos around her belly button, at the bottom of her spine, and between her shoulder blades at the base of the neck. She has her nose, ears, lip, belly button, tongue and clitoral hood pierced

She works as self-employed textile artist and art teacher but has previously worked as a tax officer, a life model, bar waitress, care worker, 3-D artist and a costume designer. Her dream job would be a trapeze artist, fashion or costume designer and a world traveller

Her last holiday was travelling alone to Ozura, Hungary for the Solipse Festival. She then travelled through Europe to Orgiva, near Granada, Spain. Nichola's most memorable holiday was in Ibiza where met up with a punk and got into much naughtiness.

Her dream holiday would be a stay in a Buddhist commune in India where she would meditate, learn yoga and chill out. Afterwards she would move to the Himalyas and then take on the rest of the world.

Nichola was nominated in the fifth week for eviction, receiving four nomination votes. She was nominated against eventual winner Craig. On Day 36, Nichola was evicted with 72% of the public vote. 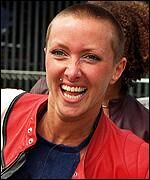 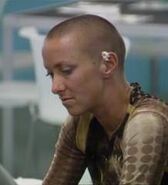 Nichola is evicted from the Big Brother 1 House