Michael Hughes is a housemate from Big Brother 9.

When Michael (Mikey) was 23 he lost his sight whilst undergoing an operation and has now been blind for 10 years. Mikey works as a radio producer for a blind radio station called 'Radio Insight' and in 2007 was part of a team that won a Sony Radio Academy Award. He is extremely proud of his career and feels privileged to be doing what he does. If he won a million pounds he would like to quit his job and write radio plays and books, plus buy a pet pig!

Mikey describes himself as wacky, zany and non-conformist and considers his best ability is to make others laugh. His favourite party trick is to do stand-up comedy whilst dressed up in girls' clothes.

Mikey decided to audition for Big Brother this year as in the past people could smoke in the House and he dislikes the smell of smoke due to his acute sense of smell. He hopes his time in the Big Brother House will help him to be more tolerant of people and would like to come across as an entertaining housemate and not boring or a grumbler.

Michael did not face the public vote once throughout his entire stay in the House. He finished the series in second place with 48.7% of the public vote, and left the House on Day 93.

He ran as an independent in the 2009 Glasgow North East by-election receiving 54 votes. 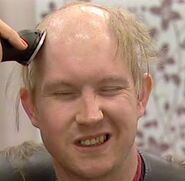 Michael shaves his head for a task in Big Brother 9

Michael in the Big Brother 9 House

Michael is evicted from the Big Brother 9