Marco Jaye Sabba is a housemate from Big Brother 5.

What is your greatest fear about going in? Being rejected by people I'm close to - when coming out - and having doors closed on me because of Big Brother, as well as family being persecuted whilst in there!

What will most annoy the other housemates about you? Can be quite untidy as well as loud. Dramatic.

What will they love? Quite outgoing - the drama queening I'll bring to the house, that I can have a good laugh.

What will you do if you don't win? Return back to normal life - hopefully.

Tell us a joke. Englishman, Scotsman, Irishman in the jungle and encountered a tribe called Maw Maw.

What is your party trick? Crank phone calls when drunk.

Before Big Brother, what was your claim to fame? Interviewed by MTV outside the Legally Blonde II premier in Leicester Square.

When you leave the house, who would you most like to see? My mum who I'm very close to, or my best friend, Dominique.

Describe your perfect Valentine's dinner? To a theme park during the day. Then a restaurant for a shell fish dinner.

Why Big Brother? I want a really unique experience that will help me to learn about myself and what other people think of me. I also think it will be a laugh.

Marco received his first official strike on Day 21, following numerous arguments and physical violence amongst the group. Marco was nominated for eviction on Day 32, having received five nominations from his fellow housemates. He was nominated alongside housemates, and close friends, Nadia and Michelle. He evicted on Day 36 with 52% of the vote.

In 2004, Marco was in a scene in a Broadway show Little by Little. 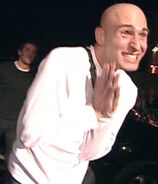 Marco in the Diary Room

Marco walks towards the House