View source
watch 01:36
We're Getting Mutants in the MCU - The Loop
Do you like this video?
Play Sound

Lisa Appleton is a housemate from Big Brother 9.

One half of the first ever summer Big Brother couple, Lisa is dating fellow new housemate Mario. The former bodybuilder is a fitness and health fanatic who teaches fitness classes alongside her regular job as a sales rep for tanning products. She is also involved in charity fundraising.

Lisa's the proud mother of an 18-year-old daughter, and has a spiritual side - she believes in reincarnation, life after death, clairvoyants, ghosts, spirit guides, and universal dynamics. Lisa met Mario three years ago when she bought a crystal ball from him on ebay and met up with him to collect it. She says the most significant event in her life was when Mario pawned his Rolex to buy her a boob job.

Lisa says she's often likened to Xena Warrior Princess, and says she's "like a magnet exerting powerful attraction". A "punk rocker" at age 11, she later developed an interest in archaeology at age 13, even going along to local excavations to help out. She wants to be in the Big Brother house to unlock her inhibitions and to test herself, and would be very happy if she found the boyband Westlife in the House so she could have a bath with them.

In February 2009, Lisa received minor local press attention after she and fiancé Mario Marconi found a Pecan Weevil in a bowl of Kellogs' Crunchy Nut Cornflakes.

In January 2013, Lisa and Mario ended their eight-and-a-half-year relationship after it was "destroyed" by Silva Carmichael, who conned the couple into filming a fake reality show. 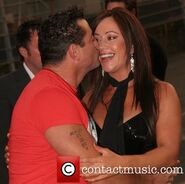 Lisa is evicted from the Big Brother 9 House