Celebrity Big Brother 17 is the seventeenth series of the British reality television series Celebrity Big Brother, hosted by Emma Willis and narrated by Marcus Bentley. The series launched on 5 January 2016 on Channel 5 in the United Kingdom and TV3 in the Republic of Ireland, and ended 32 days later on 5 February 2016, making it the longest celebrity series to date. It is the tenth celebrity series and the fifteenth series of Big Brother overall to air on Channel 5.

With three voluntary exits from Angie Bowie, David Gest and Jonathan Cheban, this series equalled the record with Celebrity Big Brother 5 in 2007, to have the most housemates walk from a celebrity series.

On 5 February 2016, the series was won by Scotty T with 33.6% of the final vote, with Stephanie Davis finishing as runner-up.

On 7 December 2015, it was revealed that the series would have a much "grittier undertone". A statement from Channel 5 also announced that "as ever the celebrities will be called to the Diary Room to nominate. Not everyone will be present in the final act, but who will make the curtain call and take the final bow? You decide."

It was confirmed that live evictions would be broadcast in two parts, similar to Channel 4 evictions from 2000 to 2010.

Bit on the Side

On 7 December 2015, it was revealed that Celebrity Big Brother's Bit on the Side will continue to be hosted by Rylan, this time under his new married name, Rylan Clark-Neal.

It was also confirmed that Bit on the Side will return to airing on weeknights only on Channel 5, after also appearing on weekends on 5* in the summer series.

It was announced that live feed would return for the seventeenth series, with an hour of live feed broadcast every weeknight on 5*.

For the first time since Celebrity Big Brother 1 in 2001, the series had no sponsorship. It is unknown whether a deal will be confirmed and a sponsor confirmed during the series run.

In a statement from Channel 5, they teased that "the famous House has undergone a major costume change, and Housemates will be transported to a striking and theatrical setting which echoes the vaudeville theatres of a bygone era. As they take their cue to enter the House, the celebrities will descend down a majestic staircase, leading to glamorous rooms made up of rich opulent textures and packed with intriguing curiosities."

They also teased that "the BB garden has been transformed into a Whitechapel style foggy street scene with a Victorian pub snug which will provide a hidden corner for sharing secrets and backstage backstabbing." 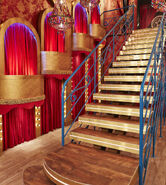 A simple full-length trailer premiered on Instagram on 18 December 2015, with a compilation of the close-ups from the previous 'eye flashes' preceding a long shot of the logo on a theatre stage.