View source
watch 01:36
We're Getting Mutants in the MCU - The Loop
Do you like this video?
Play Sound

Celebrity Big Brother 16 is the sixteenth series of the British reality television series Celebrity Big Brother, hosted by Emma Willis and narrated by Marcus Bentley. The series launched on 27 August 2015 on Channel 5 in the United Kingdom and TV3 in the Republic of Ireland, making it the first celebrity series to be broadcast in Ireland, and concluded 29 days later on 24 September 2015. It is the ninth celebrity series and the fourteenth series of Big Brother overall to air on Channel 5.

The series launched under the new contract that renews the show for a further three years. It is also the first and only celebrity series to credit Denis O'Connor as creative director.

The series was won by ex-The Apprentice star, James Hill, who received 45% of the final vote.

On 31 July 2015, it was confirmed that the series would follow a "UK vs USA" theme, with Channel 5 teasing that "the housemates will will feel far from home as there will be plenty of surprises along the way. Our patriotic celebrities will need to be very competitive as UK and USA is pitted against each other in an epic trial of tasks, challenges and twists." It is the first celebrity series to feature a prominent theme throughout, similar to the civilian series' themes.

Bit on the Side

On 31 July 2015, it was revealed that Rylan Clark will continue to host the spin-off show Celebrity Big Brother's Bit on the Side, and that it would be returning to it's original broadcast format of seven days a week.

On 14 August 2015, it was announced that an hour of live feed would be broadcast every weeknight during the series on 5*; the most live feed offered during a series since the show's move to Channel 5.

The House was redecorated following the sixteenth civilian series, which concluded in July; the first time that a summer celebrity series' House has been fully redecorated and changed significantly from the previous civilian series since it's move to Channel 5 - mainly due to the change of theme and the longer gap between the two shows than usual. The House will be decorated with British and American iconography to fit the "UK vs USA" theme. 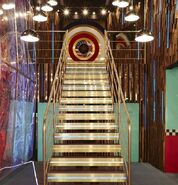 A 6-second teaser was released on 31 July 2015 promoting the series and it's new theme for the first time.

On Day 7, Jennie Bond, a British journalist, royal correspondent and television presenter, briefly entered the House as part of the "Big Brother Royal Family" task where she interviewed Lord James and Lady Natasha. Both were unaware that the American servants were watching from the potato-peeling tower.

On Day 23, Big Brother presenter Emma Willis entered the House as part of an eviction twist, which saw the housemates with the most amount of public votes to save, choose out of the remaining housemates who they wanted to save from eviction.

On Day 27, presenter and regular Bit on the Side panelist Eamonn Holmes entered the House as part of the "Battle of the Nations" game show task, which saw Team UK and Team USA answer questions about their fellow housemates and events inside the House based on a viewer opinion poll.

Every week, a competition saw Team UK and Team USA battle it out to win power over the House. Whichever team won, decided whether a President or Prime Minister would rule the House. On Day 2, as new housemates, only Bobby and Janice could compete to become President or Prime Minister. On Day 10, after Team USA won the task, the American housemates voted for who they wanted to become President.