Big Brother 6 was the sixth series of Big Brother in the UK, a reality television show on Channel 4, in which a number of contestants live an isolated existence in a purpose-built house who try to avoid being evicted by public vote, with the aim of winning a large cash prize at the end of the run. Big Brother 6 ran for eleven weeks, at the time the longest the programme had lasted (subsequent series extended the duration to thirteen weeks). The sixth series began on 27 May 2005 and ended on 12 August of the same year.

Makosi Musambasi returned in 2010 to compete in Ultimate Big Brother. She entered on Day 1 and become the second Ultimate housemate to be evicted on Day 11. Anthony Hutton also returned as a guest on Day 10 to have a picnic date with Makosi.

The first reports of this series were announced in March 2005 when Channel 4 confirmed that Big Brother would return for its sixth series in the summer of that year. Within that announcement the company revealed that host Davina McCall, Big Brother's Little Brother presenter Dermot O'Leary, and Big Brother's Big Mouth (called Big Brother's EForum the previous year) host Russell Brand would return along with the show. Soon after, Channel 4 programming director Kevin Lygo told the press that Big Brother 5's evil theme would not return despite its success the previous year and that the programme would be renewed for 2006 and beyond.

In April, Channel 4 confirmed that Big Brother 6 would start on 27 May 2005, in keeping with the tradition that Big Brother UK would start in late May. On 30 April 2005, Channel 4 revealed the eye for the series, a sliced mirror of alternating black and blue strips, in reality two eyes on top of each other. This helped fuel rumours about two houses, an idea that although never coming to fruition, was put into practice during the 2003 series of Big Brother in Australia. On 9 May 2005, Channel 4 began airing countdown bumpers, starting at eighteen days rather than the usual ten days before the launch; subsequent series began airing countdown bumpers ten days before the premier. Channel 4 contradicted itself two days before the launch show, confirming that Big Brother 6 would, in fact, be evil. The broadcaster also told the press that there would be thirteen housemates with a theme of "unlucky thirteen," inspired by triskaidekaphobia.

The House for Big Brother 6 was a radical change from the oppressive and angled house from the previous year. House designer Patrick Watson described the design as "spirational and yet not wildly practical." Although the House is still quite small, light pale colours and high camera angles give the viewer the impression that the House is larger than it actually is. Watson also revealed that he accomplished this by extensively utilising mirrors for an airier and cooler atmosphere. 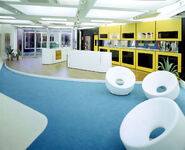 Note 2: As Vanessa discussed nominations, all housemates were up for eviction and their nominations were voided. Had this not happened, Derek and Sam would have faced the public vote.

Note 3: As punishment for discussing nominations, Craig, Derek and Roberto were banned from nominating.

Note 4: As punishment for discussing nominations, Anthony and Maxwell were banned from nominating. As Makosi was on a secret mission, she had to evict one person from the secret garden, the other two entered the House. Makosi chose to evict Kinga, and Eugene and Orlaith entered the House.

Note 7: After Orlaith walking, Kinga was brought into the House. She was instantly set a secret mission in which she needed to get at least one person not to nominate her. If one person failed to nominate her, she would be immune and would definitely appear in the final week of Big Brother. She passed her task as none of the housemates nominated her for eviction.